A married lady has been arrested in Enugu State for defrauding a grieving couple with a ‘baby,’ which she claimed belonged to their late son. According to the police, the lady, Elitha Emeka and her husband, Emeka Moses Okechukwu planned the scam together. Detectives in Enugu State Police Command described the Elitha and her husband as seasoned fraudsters. 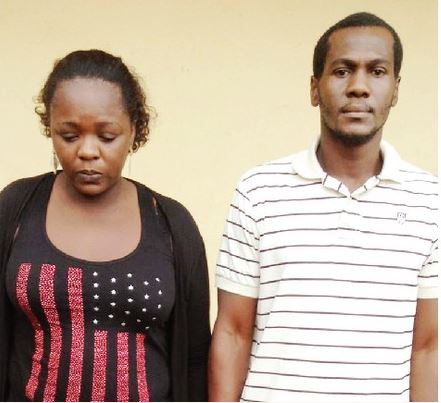 Elitha and Okechukwu started playing tricks on Mr. and Mrs. Eneje just months after their only son; Paschal Eneje 28 was murdered by four gunmen. Elitha was said to have appeared from nowhere, called the Enejes, saying she had a baby for their son. She said she needed money for the baby’s up keep. It was later discovered that there was no baby. The Police Public Relations Officer (PPRO), DSP, Ebere Amaraizu alleged that the couple maybe part of the people that conspired and murdered Paschal Eneje, 28.

Amaraizu said: “The couple further duped the parents of Paschal. They collected N300, 000 from the deceased’s parents, under the guise that they knew those behind the killing of their late son Paschal Eneje. Paschal happened to be the couple’s only son.” Paschal was said to have been murdered on April 19, 2015, by four armed men just as he was about to drive into his compound.
The gunmen opened fire on his car and riddled it with bullets. They were said to have called his parents after killing him, pretending they had kidnapped him. They demanded for ransom, which the parents paid. Later, Paschal’s parents discovered that their only son had been killed.
While Mr and Mrs Eneje were grieving over the demise of their son and trying to find out those that murdered him, Elitha came into the scene. Police said that Elitha called Paschal’s bereaved parents and told them that she and Paschal were lovers and that she had a baby for him. She said she needed money for the baby’s up keep. When law enforcement caught up with Elitha and Okechukwu, it was discovered that there was no baby.

The parents of Paschal had however paid money into the account number given by Elitha. Amaraizu said: “The suspects had however collected the money from Paschal’s parents for the up keep of the ‘baby.’ They collected the money through a bank account provided by Elitha. Elitha however never presented the ‘baby’ to the couple even though they constantly called, begging her to bring the baby.” “The suspects are assisting operatives with investigations,” said Amaraizu. The couple’s arrest came months after the murder of Paschal. Paschal was murdered on April, 19, 2014, while Elitha and Okechukwu were arrested on September 24, 2015.