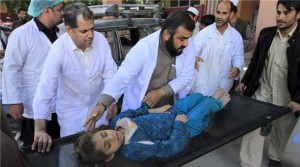 A powerful 7.5-magnitude earthquake has struck in northern Afghanistan and has been felt in a large area from northern India to Pakistan with scores of people killed across the region. Aljazeera was there:

The US Geological Survey put the epicentre of Monday’s quake near Jarm in Afghanistan’s northeast, 250km from the capital Kabul and at a depth of 213km. The total death toll stood at about 111 with at least 85 people killed in Pakistan and at least 26 more in Afghanistan, according to official reports from the two countries.

Hikmat Fasi, a resident of Parwan Province in northern Afghanistan, said the quake caused a lot of damage in the area. “We are safe but I saw a lot of buildings collapse,” Hikmat Fasi said. “It [earthquake] caused severe damage to our area. We are just praying.”

According to the Inter-Service public relations office, all military hospitals and helicopters were put on standby and high alert. Strong tremors were also felt in New Delhi and Islamabad, residents said, as authorities in India and Pakistan issued warnings for strong aftershocks.