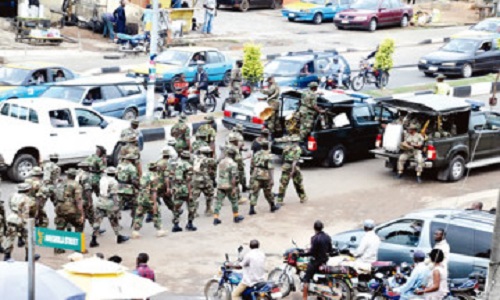 A massive military operation commenced in Ikorodu, Lagos State, yesterday, in a move to rid the town and its environs of hoodlums, pipeline vandals and other criminal elements.

Residents had complained bitterly and openly about the activities of the hoodlums, which had claimed many lives.

And in answer to their prayers, the authorities drafted armed soldiers to the town to clear the streets and crannies of suspects and destroy their hideouts.

Briefing journalists after an emergency meeting of the Security Council, Commissioner of Police in the state, Mr. Fatai Owoseni, spoke of government’s commitment to peace at all times in all parts of the state.

Owoseni said those making life unbearable for the innocent would no longer be tolerated.

According to him, security surveillance will be carried out 24 hours throughout the week, adding that the activities of the hoodlums and the criminal elements in the area have become unacceptable and uncontrollable hence government cannot fold its arms, but take necessary steps to put an end to their unlawful activities in the area.

“Government will not allow criminal elements in the state and we want to say that the immunity for the vandals is over, the arbitrarily and uncontrollable rape, vandalism and harassment is over”, the police boss said.

Owoseni appealed to residents not to panic as they may witness or hear sporadic gun shots, urging them to go about their normal activities.

He, however, cautioned them to restrict their movements to areas where the operations are not intensive.

Assuring residents that innocent citizens will not be harassed or molested during the operations, the police commissioner said it has become necessary to restrict the operations of tricycles and motorcycles throughout the period of the operation so as to prevent hoodlums from using them as quick get-aways.

CP Owoseni also said the restrictions on both okada and tricycle operations in the area will be total.

He said, “Residents are advised to restrict their movement and be informed also that we are going to restrict the use of both motorcycle (okada) and tricycles (Keke Marwa) in the area to ensure optimal and maximum performance for the operation.

“As government, we are concerned about the security situation in the state especially the activities of hoodlums and vandals in the area. We are assuring residents that the end of such activities is near and it won’t be business as usual in the area, they should not panic as we have directed security operatives in the area not to harm innocent civilians but make security of lives of the people their utmost concern”.