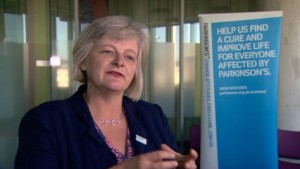 Meet Joy Milne, a woman with a peculiar sense of smell. Scientists in Scotland recently learned that she can actually sniff out people with Parkinson’s disease! “I could always smell things other people couldn’t smell,” Milne, 65 from Perth, said. But it wasn’t until much later that she began to correlate a particular ‘musky’ odor with Parkinson’s disease. She first got a whiff when her husband Les, an anesthesiologist who worked long hours, began to emit the peculiar smell. She brushed it off as sweat, but six years later, he was diagnosed with Parkinson’s.  “His smell changed and it seemed difficult to describe,” she said. “It wasn’t all of a sudden. It was very subtle – a musky smell. I got an occasional smell.”

Milne still didn’t know that’s what she was smelling. It wasn’t until she attended a meeting for the charity Parkinson’s UK, where she found other patients sharing the same musky scent, that she made the connection. When she mentioned this observation to a few scientists in passing, they decided to investigate.

The experiment was carried out by the University of Edinburgh. Researchers gave T-shirts to six Parkinson’s patients and six healthy people to wear for a day, and then passed on the used shirts to Milne. She had to determine, only by smelling the shirts, which of the participants had the disease. And her diagnoses were chillingly accurate – she was able to correctly identify 11 out of 12 shirts. For the one shirt that she got wrong – the person was healthy – she continued to insist that they had the ‘warning scent’. And she was right – eight months after the study, that individual was diagnosed with the disease.

“That really impressed us,” said Tilo Kunath, a scientist at Edinburgh University. “We had to dig further into this phenomenon.” Researchers realized that the smell that Milne was referring to could lead to groundbreaking discoveries in terms of dealing with Parkinson’s, a disease that’s incredibly difficult to diagnose. Scientists from the universities of Manchester, Edinburgh, and London are now conducting experiments to identify if the people with Parkinson’s emit different kinds of skin chemicals. Using this information, it could be possible to develop a life-changing diagnostic test as simple as swabbing a patient’s skin.