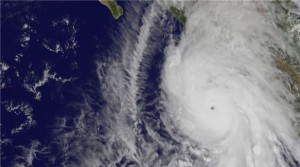 Officials had warned of “potential catastrophic” consequences but early signs were positive as Mexican President Enrique Pena Nieto said the hurricane had caused less damage than feared. Yet, in a televised message to the country almost five hours after Patricia crashed ashore in western Jalisco state, the president urged Mexicans to remain alert as the storm still posed a threat.

“With the information available up to now and taking into account that the [weather] phenomenon is ongoing, the first reports confirm that the damages have been smaller than those corresponding to a hurricane of this magnitude,” he said. “However, it’s important for the population to remain in shelters,” Pena Nieto added. “We can’t let our guard down yet. I insist, the most dangerous part of the hurricane has yet to enter the national territory.”

There were early reports of flooding and landslides, but no word on fatalities or major damage. TV news reports from the coast showed some toppled trees and lamp posts and inundated streets. Patricia’s centre made landfall in a relatively low-populated stretch of the Jalisco state coast near Cuixmala. The nearest significant city, Manzanillo, was about 85km southeast – outside the scope of the storm’s maximum-strength winds.