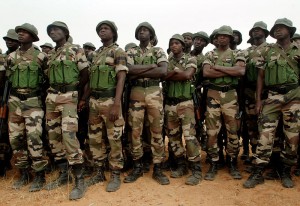 The military has issued a fresh warning to those flaunting the curfew orders in Damaturu, the capital of Yobe State. The state is one of the three north eastern states badly hit by Boko Hara insurgency.

The fresh warning was contained in a press release signed by Col. Texas Chukwu for General Officer Command 3 Armored Division Nigerian Army(Tactical), Damaturu, reminded residents of the city that the curfew time is still in force from 10pm to 6am.

“In the cause of the fight against the Boko Haram Terrorists (BHTs) here in Damaturu, Yobe State, it has become necessary for the military and the state government to warn on the movement of citizens for a certain period for the benefit of all. It is worthy to remind the good citizens of Yobe State that the curfew period still remains from 10pm to 6am…,” the statement said.

The statement also gave some security tips to residents on the fight against the insurgents. The tips include watching out for strange faces in their vicinity, avoiding crowded places such as recreational centres, motor parks, and football viewing centres; market places and unusual gatherings at different places in the town.

The military also solicited the “support and cooperation of the citizens with security agencies by providing them with useful information concerning the insurgents to enhance their job, while pledging the confidentiality of the informant.”