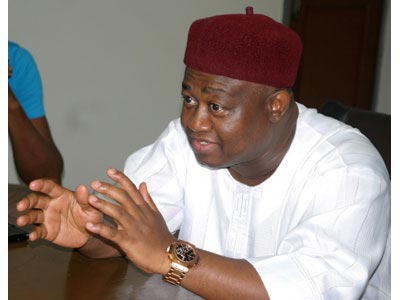 A former presidential aspirant on the platform of the All Progressives Congress (APC), Mr Sam Nda-Isaiah, on Monday visited President Muhammadu Buhari at the Aso Rock Presidential Villa in Abuja.

Nda-Isaiah, the publisher of Leadership Newspapers, was one of Buhari’s political opponents in the APC presidential primaries held in Lagos on December 11, 2014.

The APC chieftain arrived the president’s office at about 11.40am and left the Presidential Villa at 12.43pm.

This was the first time Mr. Nda-Isaiah would be sighted visiting the Aso Rock Villa alone since President Buhari moved in last June. Before now, he often visited the seat of power alongside other APC chieftains.

The newspaper proprietor had been speculated to be among those likely to make President Buhari’s ministerial list but So far, his name has not been mentioned in media reports as one of the purported nominees.

President Buhari is expected to send the second batch of his ministerial nominees to the Senate any time soon.

Nda-Isaiah, while leaving the State House on Monday, merely acknowledged cheers from journalists as he refused to grant any interviews on the purpose of his visit.