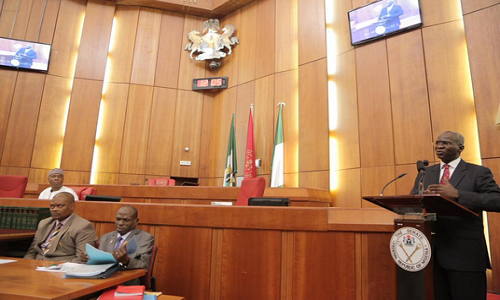 Former Lagos State Governor has once again cleared the air over the controversial N78 million spent for the upgrade of the website – www.tundefashola.com and borehole construction at over N300 million under his watch as governor in the state.

The former governor, who was undergoing screening as a ministerial nominee at the Senate chambers on Wednesday, indirectly addressed the issue after Senator Enyinnaya Abaribe (PDP, Abia South) threw the question, “Did you really build a Website for N78Million and constructed borehole for over N300?”

According to Fashola, while he was governor of Lagos State for eight years, he never signed checks for contracts or sat at contract awards meetings, stressing that all through the allegations leveled against him, nobody has accused him of corruptly enriching himself.

“I don’t sign cheques, none of my commissioners sign cheques. I never signed a cheque”, he responded to the question. “I don’t fix contract prices; it’s an institutional process. I don’t sit in award of contracts; there is a state tender board and later the state procurement agency”.

Giving further insight on how the system works in Lagos, the minister-designate explained that “in order to execute works on a project, we need the input of architect, quantity surveyors, structural engineer and we have consulting ministries. For civil works, it is the Ministry of Works; for science, it is the Ministry of Science and Technology among others.

“Now periodically, they do market surveys with the Ministry of Economic Planning , the Statisticians are there to fix prices from biro to Iron rod to cement it is approved and it becomes the  benchmark price of government procurement, nobody can award any other contract over that benchmark”.

“The unfortunate things about money is that it often raises suspicions even among brothers (Senate chamber erupts in laughter). Nobody have alleged that I have corruptly enriched myself, I could not be the master of computers and technology, I need something to do my work or award contracts”, Fashola added.

The minister-designate answered questions on improving IGR, security of lives and property, deportation of destitute from Lagos during his tenure, judgment debts, VAT, state police among others.

After he was grilled for over an hour, Fashola was asked to take a bow and go.