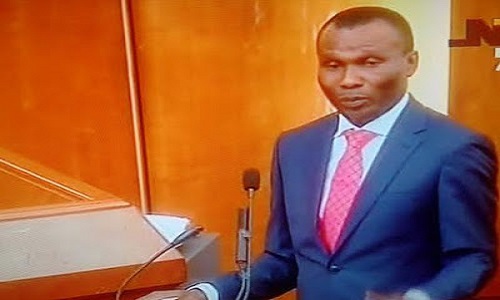 It is no longer news that six ministerial nominees were screened on Tuesday by the Nigerian Senate, leaving the outstanding number of nominees yet to be screened at five.

However, it was the screening of the Cross River State nominee, Pastor Uguru that drew the ire of some senators for they considered it to be “an offensive statement”.

Uguru was mentioning the names of some senators, mostly from the All Progressives Congress (APC), with who he traversed the country during the last campaigns, when one of the senators asked him: “Were you interacting with the PDP too?” to which he replied “God forbid!”

Coming under a point of order, Akpabio described Uguru’s statement as derogatory to PDP members.

Other PDP senators joined him in faulting the nominees’ utterance.

Senator Enyinnaya Abaribe (PDP Abia South) declared that the nominee did not submit his assets declaration papers along with his documents in violation of one of the rules set for the nominees.

The implication of this, Senator Ohuabunwa pointed out, is that the nominee was not paying his tax as at when due and as such, should be disqualified.

But Senate Leader Ali Ndume, came to the nominee’s rescue when he cited the 5th Schedule of the Constitution to back Uguru’s action.

Ndume said by virtue of the provisions in that Schedule, a public office holder may submit his assets declaration papers before taking appointment, or within 30 days after taking office.

But many other senators still complained about Uguru’s “God forbid” phrase, and were in the process of pushing their grievances further when the Senate President, Dr, Bukola Saraki, doused the tension.

Turning to the visibly ruffled Uguru, the Senate president motioned to him to apologise to the PDP senators.

A contrite Uguru then said: “I am extremely sorry”. But that singular moment of indiscretion set the tone for the remainder of his screening as he never regained his composure thereafter.