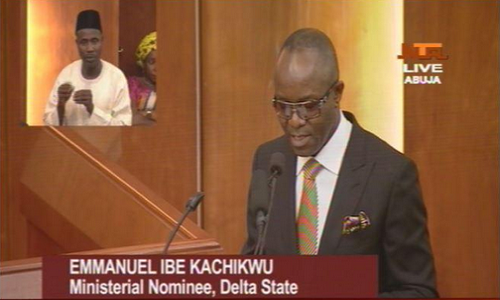 Nigerian National Petroleum Corporation (NNPC) Group Managing Director, Dr Ibe Kachikwu, said refineries in the country performing below 65 per cent of capacity would be shut down in December, 2015.

Kachikwu, one of the 37 ministerial nominees stated this while responding to questions by some senators during his screening at the Senate on Wednesday in Abuja.

He disclosed that the reality is that functioning refineries were operating at only 25 per cent, contrary to reports that they were doing well.

He said that it was not enough for a refinery to produce at 65 per cent today and at zero per cent the next day, stressing that anytime crude was not utilized by a refinery, the government lost money.

On recurring scarcity of petroleum products, especially petrol and kerosene, Kachikwu said that the situation would continue unless the refineries performed optimally.

“Performance levels are about 25 and 26 per cent; it is not enough to do 65 per cent one day and do zero per cent the next day.

“We have started a policy of not giving crude to any refinery that is not producing.

“Port Harcourt refinery is producing at over 60 per cent and we want to drive it to 80 by December.

“Warri Refinery has indicated that it will soon come on stream; we will begin to pump crude to Kaduna Refinery by tomorrow (Thursday) and by the next five days, we will know if they will produce above 65 per cent.

“Any refinery that does not produce up to 60 per cent is not into production, and at the end of December, we will only allow those who perform optimally.

“Those that do not, we will shut them down”, he said.

The NNPC boss said that a lot of work needed to be done on the refineries as they had not been well maintained in the last 10 years.

He hinted that importation of petroleum products would be stopped, saying that doing so was costing the nation a lot of revenue.

“Kerosene is a different ball game; only NNPC imports kerosene in this country because nobody can import and make money.

“Fifty per cent of NNPC subsidies go to kerosene, so our refineries must work so we can get kerosene and gas.

“Importation is something we must quickly get out of so we must ensure that our refineries work; we must build and have a strategic reserve of at least two years”, he said.

Kachikwu added that the nation needed to privatise the downstream sector of the oil industry, saying it would spur competition and develop the sector.

He said that corporation was working on making gas available to Nigerians, adding that plans were on to produce cylinders and make them available to all Nigerian by 2016 “and create gas points closer to the people”. (NAN)