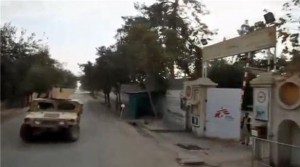 Doctors Without Borders (MSF) has withdrawn from the northern Afghan city of Kunduz, the international medical charity has said, after an apparent US air strike destroyed its hospital. Aljazeera reports:

The announcement came on Sunday, a day after the attack killed several hospital staff and patients. Bart Janssens, MSF director of operations, told Al Jazeera that the death toll is now up to 23, including 13 staff and 10 patients.

In a separate interview, Kate Stegeman, the communications manager for the group known for its French acronym MSF, said all critical patients have been referred to other health facilities and no MSF staff are working in the hospital. “Some of our medical staff have gone to work in two hospitals where some of the wounded have been taken.” Aminullah, a Kunduz resident, told Al Jazeera that all of the doctors were moving to Kabul or Mazar-e-Sharif, fearing for their lives.

His three children and wife “haven’t eaten for the past three days. We don’t even have a water supply. My children are falling sick and I don’t know where to take them”, he said. “Forget about getting medical treatment, no one is able to even provide coffins for the dead bodies in the city.” The air raid came days after Taliban fighters seized control of the strategic northern city of Kunduz, in their most significant victory since being booted from power by a US-led coalition in 2001.