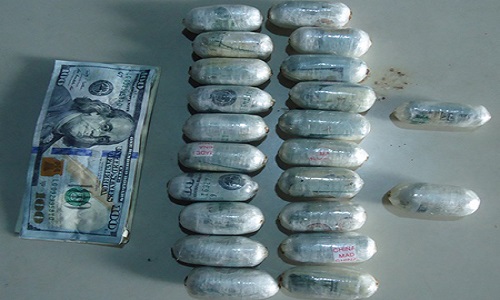 The National Drug Law Enforcement Agency, NDLEA, on Friday foiled an attempt by a passenger to smuggle 23 wraps containing $34,000 at the Murtala Mohammed International Airport, Lagos.

The suspect, Ozoh Ikenna, was arrested on his way to Brazil during screening of passengers on Etihad Airways flight to Abu Dhabi.

The foreign currency was packed in wraps similar to narcotics and concealed in his boxers.

The NDLEA airport commander, Ahmadu Garba, said the detection of the dollars was made possible with aid of a scanning machine.

“The wraps of dollars found on Ozoh Ikenna were detected with the aid of a scanning machine. We also conducted a follow-up operation where one Ogbo Emmanuel who gave Ozoh the $34,000 dollars was arrested”, the commander stated.

Investigations conducted by the Assets and Financial Investigation directorate headed by Mrs. Victoria Egbase, revealed that the suspects are involved in the laundering of substantial amount of illicit drug proceeds.

Egbase said, “We were able to trace over N226, 000,000 to one bank account belonging to the second suspect, Ogbo Emmanuel. The account name is Eternal God International Limited”.