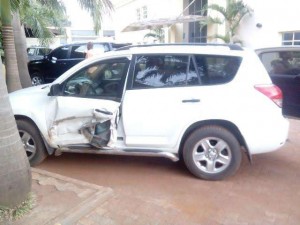 Veteran Nollywood actress, Shan George was a victim of a car crash yesterday (October 26), in Enugu.

According to reports, Shan George, her daughter and manager were travelling to Lagos on Monday morning from Calabar. The group got to Enugu and pulled over to check the tires of the vehicle.

They parked the car at Abakpa Roundabout/OnitshaRoad when a salon car rammed at their vehicle.

The driver’s front door was damaged, fortunately Shan George and the occupants in the vehicle were unhurt.

Shan George has started shooting her latest movie ‘One Good Man‘ in the city of Calabar, Cross River state, Nigeria.

The movie written by the Nollywood actress is being directed by Stanley Williams.