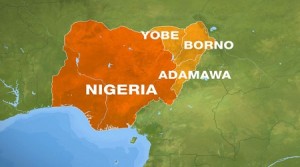 North-East Youths under the aegis of North-East Youth Peace and Development Initiative (NEYPDI) commended the governor, weekend, in Lagos. The National President, NEYPDI, Alhaji Kyari Abubakar described Ambode as a detribalized leader whose contributions must be emulated by other Nigerians.

“We the youths from north-east appreciate the good gesture of Ambode and the good people of Lagos State for identifying with the plight of the displaced people of north-east,” he said.

Abubakar noted that the recent donation is not the first assistance rendered by the state government since the challenge of coping with the Internally Displaced Persons (IDPs) became worrisome in the country. He said Lagos State has even assisted in hosting some displaced persons from the northeast.

The youth leader expressed worry over the living condition of youths and women in the north-east, urging the federal government to establish North-East Development Commission to handle the reconstruction of the area.

“Judging by the raving effect of Boko Haram insurgency to the region, we feel, the establishment of a commission would address the reconstruction of the area as soon as possible,” Abubakar said.

He expressed optimism that the military would be able to deliver on the deadline given to end insurgency in the area.

He added: “The people of north-east especially the youths would continue to support President Buhari in his effort to defeat Boko Haram and liberate the zone from the menace of insurgency which has destroyed lives and economy of the people.”