Home News Feed OAU Students Protest Non-Payment Of State Workers’ Salaries
Facebook
Twitter
WhatsApp
The Students Union, Obafemi Awolowo University took to the street of Oyo state as it joins in the celebration of Nigeria at 55 to peacefully express its displeasure at the non payment of workers’ salaries across Nigeria especially in Osun state and Oyo state. the Union and its members who despite in their period of examination came out en-masse to protest the poor funding of education sector, have demanded that President Buhari to implement the 26% budgetary allocation to education as recommended by UNESCO.

Two buses were used to convey all individuals present.

The Student Union President, Omotayo Akande took center stage to give a welcome message. He spoke on the reason for embarking on trip which was a two-way motive trip: to pay a condolence visit and embark on a protest. He further enlightened all students present on the order of programme for day.

He stated that there would be a protest at Ibadan to pass messages to the Governor of Oyo State through the media houses on the poor welfare conditions on Obafemi Awolowo Campus and the non- payment of salaries by the State Government despite receiving various funds as bailout for the disbursement of these monies.
This was a welcome idea by everyone in the bus as they all abided by the President’s plan.

Along the way, the Union’s President threw a question and opened the floor to all students in the bus to bear/lay their minds bare on certain intellectual discourse as pertaining the Independence day celebration.
His question was titled, ” 55 years of Nigeria’s Independence: Is Nigeria truly ‘Independent’ or ‘neocolonized'”
As a preamble to the discuss, the President spoke on the unpaid salary trend, Ministerial listing, political party Ideologies and EFCC’s recent recovery of stolen funds. Attempting to be comprehensive in his approach, he spoke on the HDI(Human Development Index) factor fashioned out by Europeans in order to measure a country’s growth in totality of all areas. The criteria he mentioned for this HDI Measurement were just three: Gross Domestic Product(GDP), Life Expectancy and Literacy. He spoke on how developed countries could only attain 0.9 out of a 1, noting that 1 is the highest while stating that developing countries fluctuated between 0.1 and 0.2. Bringing home his argument, he spoke on the collapse of some parts of Block 4 in Awolowo Hall of Residence, the ever dwindling welfare situation on campus;he however justified these reasons in his preamble to the argument. He finally called for submissions, stating that Education was the only way out of Nigeria’s socio-economic,Economic and political mess. 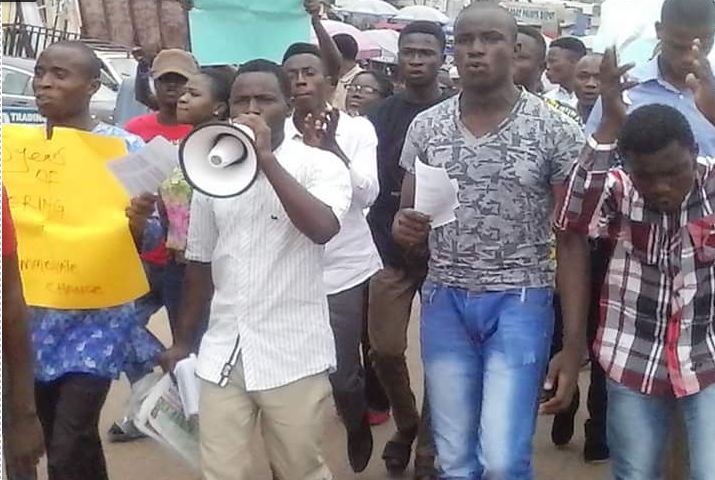 A submission was given to further press home his point by one of the students. Which agreed to the ever glaring fact that Education is the only solution that can be used to tackle any problem. Proper planning and the right intellectuals are all that is needed.

To conclude the argument, Omotayo Akande called on Adebayo Benjamin, ACJ’s President to speak on the effect of neocolonialism and the role of the press in the whole process.
Laying Credence to the book, “How Europe Underdeveloped Africa,” the ACJ President advised that as students,we should erode underdevelopment and fight for what is ours, adding that Education is our only way out.

The Union’s President pleased with the trend of the arguments, pushed for an Aluta praise and worship Session that was heralded by the Two versions to the Great Ife Anthem. Lots of songs were chanted to praise the Greatness of the University and the generality of the Students.

However, when “TY” came back on stage(inside one of the buses), he observed that some of the students could not “gyrate” as they should and he stressed the need for everyone to be able to “gyrate” properly.

Immediately the buses arrived at Iwo road in Ibadan, protest placards and handbills were quickly distributed as a massive protest started in earnest.
All students, engaged in a protest blocking the traffic as they marched down to NTA Ibadan on foot, followed by the two buses at a slow pace inhibiting the flow of traffic on the way.
Interviews with the President, Vice-president and other notable individuals in the Union were taken by ACJ Correspondents.
The protest continued at NTA Ibadan but the media house proved to be obstinate and unapproachable as they refused the Union say even after the roads were blocked to attract their attention. An ultimatum was given with immediate effect. It was after much cajoling that the Union were finally given audience and a live coverage. The President of the Students’ Union, Omotayo Akande spoke first, conveying his message to the Government in English after which Oketooto Oluwaseun relayed his in the Yoruba Mother tongue.

The protest moved to the National Union of Journalists(NUJ),Oyo council secreteriat in Ibadan where the Union was warmly received as their press statements were taken before another media coverage was given.