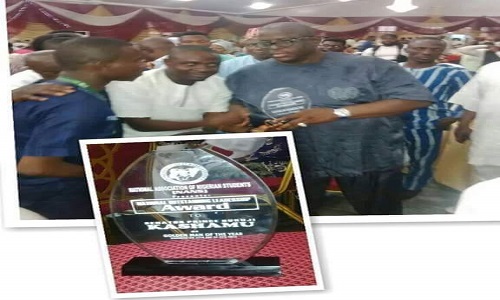 The Ogun State chapter of All Progressives Congress, APC, has blasted the students’ umbrella body, the National Association of Nigerian Students, NANS, for its recent conferment of an award on the senator representing Ogun East senatorial district in the National Assembly, Buruji Kashamu.

The Ogun State chapter of NANS had also distanced itself from the award conferred on Senator Buruji by its national leadership, wondering what the billionaire politician had done for Nigerian students to make him a recipient of the ‘Golden Man of the Year’.

The Ogun APC in a statement signed by its Publicity Secretary, Mr. Sola Lawal, said that the award conferred on the senator was a honour misplaced and a mockery of students’ union activism in the country.

He said, “The honour signifies a pitiable erosion of value which points to the fact that indeed the future is bleak for the future generation of Nigerians as represented by the current leadership of the National Association of Nigerian Students that has been so debased, backward and visionless.

“This is the same NANS which in the past was the doyen of activists and patriots of this country. This is the same NANS that was once celebrated by icons of nation building and nationalists such as the late Tai Solarin, Bala Usman, Gani Fawehinmi, Prof. Eskor Toyo, Margaret Ekpo and Prof. Wole Soyinka among a host of others.

“This is also the students’ body which, in the past, stopped anti-people governments across Africa on their track.

“It should be recalled that it was the predecessor of NANS, the National Union of Nigerian Students that stopped the government of First Republic from going ahead with the widely derided Anglo-Nigerian Defence pact.

“For our students, who are regarded as leaders of tomorrow, to acknowledge a fellow like Kashamu as its mentor, is a shame and is condemnable”.

The student leaders, the APC further stated, should realise that the change, which President Muhammadu Buhari promised Nigerians “is real” and the union should desist from its “hungry posture and join in this crusade to rid the country of undesirable elements who are bent on attracting misguided admirers with ill-gotten wealth”.