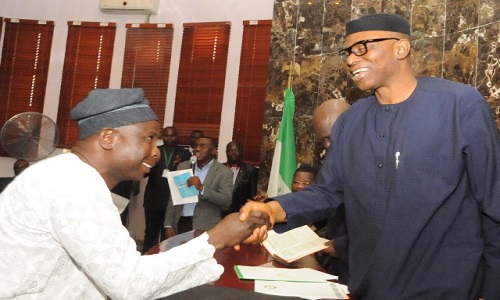 The Ondo State chapter of the All Progressives Congress (APC) has called on Lasisi Oluboyo to stop parading himself as deputy governor.

The party advised Oluboyo to vacate the office for the impeached deputy governor, Ali Olanusi, or risk going to jail for false assumption of office.

A statement on Monday in Akure by its Publicity Secretary, Abayomi Adesanya, said: “We have it on good authority with incontrovertible evidence that the oath of allegiance and oath of office purportedly taken on April 27 by Lasisi Oluboyo were administered by the Attorney-General and Commissioner for Justice, Eyitayo Jegede.”

It said: “This was against the provisions of Sections 185 (2) and 187 (2) of the 1999 Constitution. Sections 185 and 187 empower the Chief Judge, Justice Olasehinde Kumuyi, to administer the oaths of allegiance and oath of office on the governor and deputy governor of Ondo State.

“Contrary to these constitutional provisions, Justice Kumuyi delegated his constitutional responsibilities and powers to Jegede for reasons best known to him.

“The chief judge, thereafter, issued a false certificate claiming to have personally administered the oaths, which the government has been relying on to cover up this constitutional aberration.

“The CJ’s action is illegal and an abuse of office. In view of this illegality, in the eyes of the law, Oluboyo’s swearing-in is null and void.

“Therefore, he is not known to law. He should stop parading himself as deputy governor and we advise him to vacate the office or face criminal prosecution that may land him in jail.”

“We appeal to the NJC to thoroughly investigate the matter, and that Justice Kumuyi be punished for abdicating his constitutional responsibilities.

“Similarly, we are calling on the Legal Practitioners Disciplinary Committee to sanction and debar Jegede (SAN), because he cannot claim ignorance of the law for his action”.