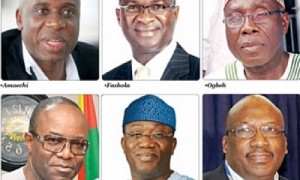 The speculations surrounding the would be cabinet Ministers in the President Muhammadu Buhari’s led government has been finally laid to rest by the release of the nominees on the senate floor today. I have monitored views all over the social media. Many as usual are not devoid of sentiments and partisanship. It is pathetic to read from the APC apologists on how PDP destroyed the country for the past 16years and yet the list submitted was partially filled with same people. Personally, I am not excited about some of the nominees who have been part of the agents that ridiculed governance and fingered in various dubious dealings across the nation. Some may quickly point out to me that none of the appointees have been pronounced to be corrupt by a competent court of law, but then we know our judicial process has been deeply bastardized. From time immemorial, there has been no serious corruption cases successfully prosecuted, maybe a few exceptions here and there.

But if truth must be told, at this stage we cannot totally exclude politics from governance. The fact is without politicians, even the finest leaders will find it difficult to navigate the political terrain or attain political leadership position. Hopefully the senate will depart from the typical tradition of “bow and go” to at least do some diligent work. But again, one must not forget the senate is filled up with corrupt politicians, fraudsters and drug barons so our hopes must have limits. Even the Senate President who is to chair the screening process to ensure Ministers with clean records emerge, himself is battling corruption charges at the Code of Conduct Tribunal.

That being said, the noise about the list should be laid to rest, but then we should rather redirect our energy to other important things. I think President Buhari should be given the benefit of doubt and be supported as he steers the ship of Nigerian state from the imminent wreck it has been positioned by previous administrations which extends beyond the infamous administration of Goodluck Jonathan. So my expectations were not to see saints really, but at least to see the fine mix of politicians and technocrats led by a leader who understands the vision, and communicates it clearly.

However, the game changers should be the citizens who as a matter of urgency must resume and take serious the office of the citizen. The office is the highest office attainable in the land. As citizens, we must play active role in defining issues, considering solutions and identifying resources and priorities for action. To see the “change” we want to happen, there must be meaningful involvement of individuals in policy and program development. We must make government answerable and accountable to us. This is not negotiable, and must never be sacrificed on the altar of mediocrity.

Some other the key places we must beam our searchlight into; legislative arm, judiciary and local government administration. Often times we keep our eyes on the Executive arm government and give room for evil to thrive at other levels. We must keep our eyes on the legislators who often times are known for their notoriety in smuggling and promoting self serving laws. Also the judiciary which rarely protects the interest of the common man deserves keen attention. Like Daniel Webster said, “Justice is the ligament which holds civilized beings and civilized nations together. Wherever her temple stands, and so long as it is duly honored, there is a foundation for general security, general happiness, and the improvement and progress of our race.”

To change everything, we need everyone. The future we want to see is not all aboutBuhari and his ministers, but rather it is about us! We are the change.
God bless Nigeria

Oladipupo is a member of Leak Times Editorial Board and a Nigerian Sustainable Development Expert currently based in Toronto, Canada.