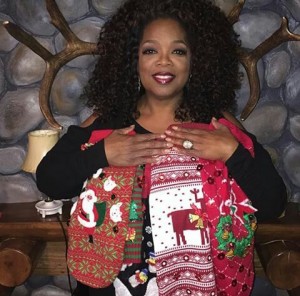 About 2 weeks ago, Oprah Winfrey was ambushed outside the Ed Sullivan Theater while recording an episode for “The Late Show With Stephen Colbert,” by a man claiming to be her “secret son.”

Now, after several weeks, Winfrey has opened up on her relationship with the so-called “secret son,” Calvin Mitchell.

According to a recent interview with “Entertainment Tonight,” the 61-year-old took the young man under her wing more than 20 years ago, after meeting him on the set of a movie she was filming.

“We were shooting in the projects in Chicago and I was sitting on set during a break, and this cute little sparkly-eyed boy came underneath the yellow tape to hand me a soda,” said Winfrey.

“I was so charmed by him that I started talking to him about his family, his school life, and found out that he was in a situation where his mother didn’t have a job and they were stuck in the projects.” she continued.

So naturally, Mitchell’s charms won Winfrey over. She even claims she aided the young man’s mother in finding employment and helped move them out of the projects. Unfortunately, despite her best efforts, Mitchell was unable to make it work at two private schools she paid for.

“I said, ‘Calvin, this is the moment,” she recalled.

“This is a seminal moment for you. I know you are 16 and can’t see the road ahead, but if you leave this school and refuse to get an education — I have tried to offer you an education twice — there isn’t another school I can put you in. If you leave this school, I am done. There is nothing else I can do.’ … And that was my last conversation with Calvin in the early ’90s.”

And while Winfrey admits she was “disappointed” in Mitchell for colluding with “The National Enquirer” to “set up” the awkward reunion. It was her experience with her “secret son” that inspired her to open her Leadership Academy for Girls in 2007. “I learned from that experience,” Winfrey said.

“If you really want to change somebody’s life, you’ve got to be able to spend enough time with them to change the way they think about what their life can be. It isn’t enough to give a person a new life or money or a new car, you have to teach them how to fish themselves.”