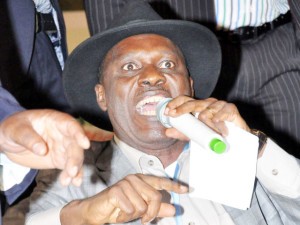 Former Minister of Niger Delta Affairs, Elder Godsday Orubebe would be arraigned before the Code of Conduct Tribunal (CCT) on November 9, over alleged false declaration of assets and acceptance of about N70 million bribe, according to reports.

The four-count charge filed on behalf of the Attorney General of the Federation (AGF) by Peter Danladi of the CCB on October 8, 2015, is currently pending before the Code of Conduct Tribunal (CCT).

“That you, Godsday Peter Orubebe, while being a Minister of Federal Republic of Nigeria in charge of Niger Delta Affairs, on or about June 29th 2011 did make a false declaration in your asset declaration form by failing to declare plot 2722 Kyamu District Abuja on assumption of office on 26th September 2007 and on leaving office (at the end of your tenure), on June 29, 2011 and you thereby committed an offence under section 15 of Code of Conduct Bureau and Tribunal Act Cap C15 and as incorporated under paragraph 11(1) & (2) of Part 1, Fifth Schedule to the Constitution and punishable under section 23(2) of the CCB & T Act,” Count one reads.

CCT’s Head of Press and Public Relations, Ibraheem Al-hassan confirmed that a charge was pending against Orubebe before the tribunal. He said summons was served on the ex-minister on October 29, adding that the tribunal has scheduled Orubebe’s arraignment for November 9.