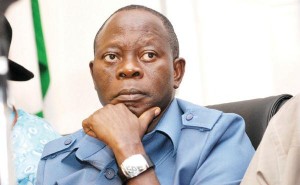 Edo State Commissioner for Information and Orientation, Mr. Louis Odion, has resigned from the cabinet of Governor Adams Oshiomhole.

Governor Oshiomhole has reportedly accepted the resignation which is expected to take effect from the end of this month.

The Nation reports that Louis said he resigned to pursue his professional career.

“I have been away for four years and my children are still young. They need my attention. I have always seen myself as a professional and I have been on sabbatical from the news room,” Odion said.

Louis Odion was Editor of Sunday Sun between 2003 and 2008 when he moved on to become the Managing Director and Editor-in-Chief of National Life Newspapers. He was first appointed commissioner in 2011 and was reappointed after the re-election of Governor Oshiomhole.