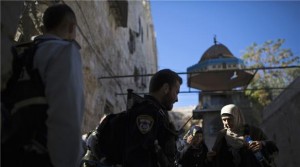 Another witnesses told Palestinian Maan News Agency that there was no attempted stabbing at the time and the man was shot dead as he was walking in the area. It was the latest incident in a recent wave of Israeli violence against alleged Palestinian attackers.

Luba Samri, Israeli police spokeswoman, said officers noticed the Palestinian acting suspiciously and ordered him to take his hand out of his pocket.

Samri said the man then attacked an officer with a knife, adding that the officer was wearing a protective vest and was not injured. Israeli police said they would release a video to prove that the incident was a stabbing attempt. The incident took place near the Lions Gate of Jerusalem’s walled Old City in the occupied eastern side of the city.