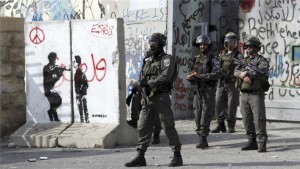 At least 10 Palestinians were wounded by Israeli fire in the occupied West Bank during a raid by troops hunting the murderers of a Jewish settler couple, Palestinian police and medical sources said. Palestinian police said Saturday’s violence began when “dozens of Israeli soldiers in military vehicles” entered an eastern neighbourhood of Nablus, one of the largest cities in the West Bank. Aljazeera reports:

“They arrested eight people and conducted searches, entering properties by force and causing damage,” the police said. Palestinians protesting against the raid in the territory’s main northern city of Nablus hurled stones at soldiers, who responded by shooting rubber-coated steel bullets, tear gas and live ammunition, the sources said.

The Palestinian Red Crescent said “10 people were wounded by live rounds to the legs or stomach,” and “four others were wounded in beatings” by security forces.  Tensions have soared in the West Bank since the settler couple were shot dead in their car in front of their four children on Thursday evening.

Rabbi Eitam Henkin and his wife Naama, both in the 30s, were buried in Jerusalem on Friday. Israel has launched a huge manhunt for the gunmen, and deployed troop reinforcements to maintain order following revenge attacks by settlers.