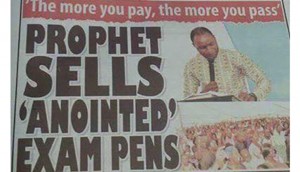 A pastor in Harare, the capital of Zimbabwe was in the news recently for selling hundreds of special, ‘anointed’ pens to local students. Prophet Sham Hungwe claims that the miracle pens will help students pass exams without even studying! Scoop has more:

“It is anointed and I declare passes when your children sit for exams; when you sit for exams,” he told members of the House of Grace International Church, during a sermon. And with the ‘O’ and ‘A’ level exams coming up, he managed to sell a lot of the 15-cent pens for different prices, ranging from $1 to $20. The more you pay, the higher the chances to pass the exams.

Several believers scrambled to secure the pens for themselves or their children, especially after one of the congregants testified that he scored 14 points on his ‘A’ level last year with Prophet Sham’s special pen. The testimony boosted sales, with one woman paying over $10 for a single pen. “They are said to work for anyone who is sitting for any test,” one member said. “My son is not very bright and I think this will help him. With the knowledge he has acquired and this pen from the man of God, I think it is going to work.”

Not everyone was as gullible though – Sham’s stunt was severely criticized by local politicians and the media. Some of them even called for his arrest, accusing him of ruining the standard of education in the city and mocking people’s religious sentiments. “Anointing cannot be commodified because you can only set a price on it and put the Holy Spirit up for sale by making God cheap and finite,” journalist Stanley Mushava wrote. “This should not be allowed to go on,” added Chofamba Sithole. “Anyone who sells anything on the basis that it has supernatural powers must be arrested for fraud.”