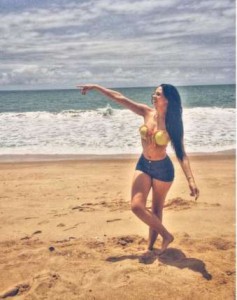 Photos have surfaced of Uche Ogbonna and his boo on the beach yesterday; they were not alone as Nollywood actress Angela Okorie was also present with her man.

IK Ogbonna and his Colombian wife were all mushy mushy on the beach on Independence Day.

Sonia Ogbonna shared a picture of her with Angela Okorie on the beach.

On September 30, Angela Okorie responded to people criticizing her for showing her boobs online. “Angela your married, Angela Your Married, is it your Married Ni, handle your ur own Single and plural let me handle my married. Boobs Still On point” she wrote on Instagram.