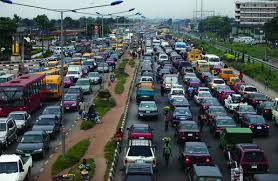 The Rapid Response Squad (RRS) of the Lagos State Police Command weekend combed some black spots in the state and arrested 40 miscreants.

“As part of the ember months programe of Lagos State Governor, Mr. Akinwunmi Ambode, we are to rid every part of the state of criminals and hoodlums hiding in the dark to perpetuate heinous crime,” RRS Commander, Olatunji Disu, an Assistant Commissioner of Police, said, confirming the arrests.

“This is in order to create a secure environment for prospective investors and to secure lives and properties of the residents especially in the ember months.

“We are ready to challenge and confront the latest upsurge in the crime in the state. Governor Akinwunmi Ambode has given us marching orders for the black spots to be combed. There is no going back.

“The RRS arrested 45 suspects during a raid on suspected hideouts of hoodlums and criminals. The suspects were held up in Oshodi, Jibowu, Victoria Island, Mile 2, Ajegunle, Ijora and Law school under Bridge,” Disu said.