Operatives of the Rapid Response Squad, RRS, Lagos State Police Command, weekend, arrested one Timothy Ojomandu, alleged to be a member of a three-man gang that hides under gridlock to attack and rob motorists around Mile 2 area in the state. 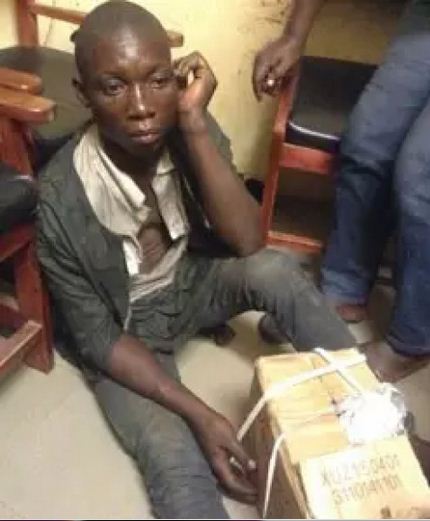 The suspect was caught in the act at about 7:30 pm by the team of policemen who responded to a distress call made by the driver of Mitsubishi Canter with number plate, FKJ 676 XF, after the suspect and his gang members had successfully stolen one carton of cell battery from the truck which was fully loaded with hundreds of the cartons.

The truck driver, Mr. Ajiboye Mogaji, who accompanied the suspect to the RRS Headquarters at Alausa, told the Police that he sighted the suspect from the side mirror of his vehicle when he sneaked-in through the back of the truck.

However, when his partner saw me alighting from the vehicle, he absconded with that one carton, and I held the suspect by his trousers when he wanted to jump down from the truck. Then, I shouted for help and the Policemen from RRS who were patrolling the area responded swiftly to the distress call.”

He further thanked the Policemen for coming to his rescue at the appropriate time before the suspect could escape.

Arrest
Confirming the arrest, the Commander of the RRS, Assistant Commissioner of Police, ACP Olatunji Disu, said: “Some RRS riders who were on routine patrol around that axis, were informed by the truck driver about the incident, and the suspect was arrested and conveyed to our headquarters immediately.”
The suspect, who confessed to the crime, said he was just being recruited into the group about two months ago.

Confession
“Our robbery gang was in the habit of stealing handsets and other valuables from pedestrians and motorists during the peak period of traffic congestion along the area. I was a bus conductor before Victor Chibonwu, our gang leader, introduced me to the act of theft. On the fateful day, I, Victor and Richard went to Mile 2, looking for our would-be victims.

On getting to the spot, we saw one truck fully loaded with cell batteries heading towards Ijora, and it was held up in the traffic. I now got the opportunity to enter inside the truck from behind. I succeeded in removing one carton of the battery and passed it to my partner walking beside me, and in the process to pass another one, the driver showed up and held me tight by my trousers before he handed me over to the Police but my other colleagues were able to run away with one carton of the battery,” he confessed.

The suspect, who hails from Isseke Local Government Area in Anambra State, simply disclosed their receiver as Mr. Gawo, who owns shops at Tin-Can Island, Apapa, in the state.

The suspect has been transferred to Special Anti-Robbery Squad, SARS, for further investigation.