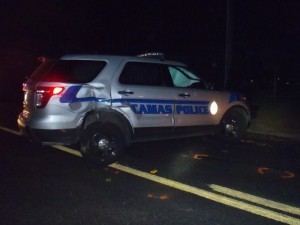 On Thursday night, a Camas Police officer was looking for a hit and run suspect in the 6300 block of NE 232nd Avenue. While conducting the search, the officer’s patrol car was hit by a 2005 Dodge truck driven by 50-year-old Daniel Jones.

According to police, Jones was in fact the hit and run suspect the officer was looking for.

Investigators believe the collision was accidental, but they do say Jones was drunk.

Jones was checked out for minor injuries after the collision, but was then booked into the Clark County jail on DUI charges. Circumstances of the original hit and run case were unavailable.