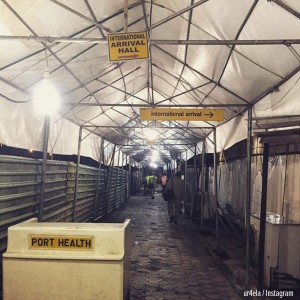 The airport was one of the five approved for remodeling by the Federal Government in 2010 in a project that was reported to cost N90 billion. When, then Rivers State Governor Rotimi Amaechi alleged in 2013 that the FG had abandoned the project, Federal Airports Authority of Nigeria (FAAN) General Manager Corporate Communictions, Yakubu Dati denied, saying 90 percent of the entire job had been completed.

Every year, SleepingInAirports conducts a survey asking travellers to rate their airport experiences based on the services and facilities available within the terminal, cleanliness, customer service, comfort and their overall airport experience.

“Those that top our charts for worst airports in the world collected the most negative feedback from voters over the past year. These airports fall flat in terms of providing any kind of enjoyable overall airport experience. Instead, they’re dirty, uncomfortable, unfriendly and lack the most basic of services and amenities. They elicit passionate critiques from those who visit them, and countless warnings for future travellers to avoid these places at all costs,” SleepingInAirports said on its website.

“The terminal’s unpleasant and unhelpful staff help to earn it this trifecta of atrocious awards. With virtually no seating, broken air-conditioning and a tent for an Arrivals Hall, it was a struggle for many voters to pass the minimum required amount of time here. The good news is that some areas of the terminal have been recently renovated, meaning you can expect actual walls, floors and windows. Though it is a far cry from reasonable, improvements are being made,” SleepinInAirports noted.

Other Airports on the list of world’s worst are: