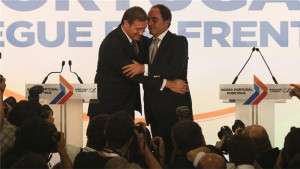 Portugal’s centre-right coalition government has won the country’s general election behind an improving economy that weathered austerity measures but appears to have fallen short of a crucial outright majority in parliament. With 99 percent of districts reporting on Sunday, the government had 37 percent compared with 32 percent for the main opposition centre-left Socialist Party. Smaller, leftist parties made up the rest. Aljazeera has more:

The result means the government is likely to be outnumbered in the 230-seat chamber by left-of-centre MPs who could block its policy proposals. A period of political instability could ensue, making investors once again nervous about the eurozone’s ability to sort out its economic problems.

Incumbent Prime Minister Pedro Passos Coelho said his government is determined to abide by the eurozone’s fiscal rules. Coelho said he is willing to compromise with opposition parties to achieve the “essential goal” of reducing national debt. “Times haven’t been easy, and the times ahead will be challenging,” he said.

Portugal needed a $87bn bailout in 2011 amid the eurozone’s debt crisis.

The government complied with a German-led austerity plan to restore financial health, by cutting pay, pensions and public services and increasing taxes that brought large street protests and strikes. The austerity policies helped propel Portugal into a three-year recession, and the socialists were optimistic they would benefit from a backlash against the government.