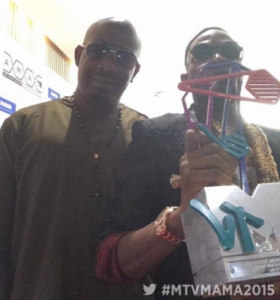 Former partners and friends, D’banj and Don Jazzy seem to be getting closer.

Don Jazzy just shared a video of himself and D’banj hanging out in his crib; Don Jazzy used the new app Periscope to record him and his former business partner.

The former best friends can be seen laughing and cracking jokes.
In the video Don Jazzy answered a question from one of his fans who wanted to know if he and D’banj are still cool, and if they will work together soon.

“D’banj is my brother, I don’t know why you people like to make it look as if we are quarreling, you people should stop listening to press people, they just want you people to feel like we are fighting. We no dey fight. I’m supposed to be going to his house later this evening. The truth is everyone is busy, he’s out of town most times, I’m out of town at times too and am working on my new guys too, so basically that’s the situation, there’s no hard feelings, no beef” said Don Jazzy.

With this new video, it seems a reunion between both parties might be in the works.