The Nigerian Constitution says if the Senate doesn’t screen or discard the former governor within twenty-one working days of the receiving of appointment he automatically becomes a Minister of the Federal Republic of Nigeria. 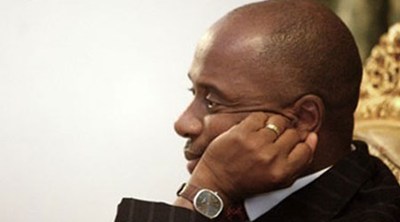 See excerpt from Nigerian constitution below:

147. (1) There shall be such offices of Ministers of the Government of the Federation as may be established by the President.

(2) Any appointment to the office of Minister of the Government of the Federation shall, if the nomination of any person to such office is confirmed by the Senate, be made by the President.

(3) Any appointment under subsection (2) of this section by the President shall be in conformity with the provisions of section 14(3) of this Constitution:-

provided that in giving effect to the provisions aforesaid the President shall appoint at least one Minister from each State, who shall be an indigene of such State.

(5) No person shall be appointed as a Minister of the Government of the Federation unless he is qualified for election as a member of the House of Representatives.

(6) An appointment to any of the offices aforesaid shall be deemed to have been made where no return has been received from the Senate within twenty-one working days of the receipt of nomination by the Senate.

The Senate, for the third time in two weeks, deferred the confirmation hearing of Amaechi today, October 20, as his name was not listed among the three nominees that were screened.

His screening had suffered several hitches in the last one week, caused by the delays by the Senate ad-hoc ethics committee, in submitting a report on the petitions written against his nomination.