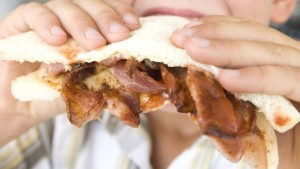 Processed meats – such as bacon, sausages and ham – do cause cancer, according to the World Health Organization (WHO). Its report said 50g of processed meat a day – less than two slices of bacon – increased the chance of developing colorectal cancer by 18%. BBC reports:

Meanwhile, it said red meats were “probably carcinogenic” but there was limited evidence. The WHO did stress that meat also had health benefits. Cancer Research UK said this was a reason to cut down rather than give up red and processed meats. And added that an occasional bacon sandwich would do little harm.

Processed meat is meat that has been modified to increase its shelf-life or alter its taste – such as by smoking, curing or adding salt or preservatives. It is these additions which could be increasing the risk of cancer. High temperature cooking, such as on a barbeque, can also create carcinogenic chemicals. The WHO has come to the conclusion on the advice of its International Agency for Research on Cancer, which assesses the best available scientific evidence. It has now placed processed meat in the same category as plutonium, but also alcohol as they definitely do cause cancer.

However, this does not mean they are equally dangerous. A bacon sandwich is not as bad as smoking. “For an individual, the risk of developing colorectal (bowel) cancer because of their consumption of processed meat remains small, but this risk increases with the amount of meat consumed,” Dr Kurt Straif from the WHO said.