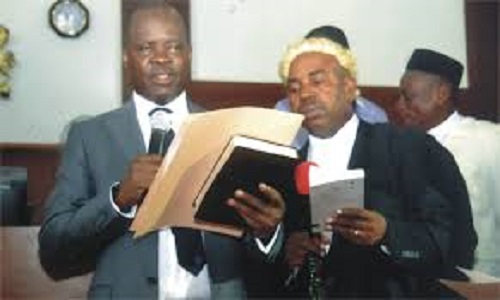 Speaker of the Rivers State House of Assembly, Hon Ikuinyi Owaji Ibani, has called for calm in the state following the legislative election tribunal judgment, which nullified his election and that of 19 other Peoples Democratic Party (PDP) lawmakers in the state on Monday.

He said that they had appealed the judgment even though he faulted the tribunal’s verdict.

Appearing unruffled when he addressed journalists in his office at the House of Assembly complex in Port Harcourt yesterday, Hon Ibani expressed hope that the judgment of the tribunal will be unturned at the appeal court.

He further dismissed as untrue, media speculations that he and 19 others were no longer members of the state House of Assembly.

“I heard over the news that the speaker and twenty others have been sacked by the election tribunal.

“No member, not even the Speaker has been sacked. The lower tribunal gave judgment in their opinion. In their judgment, [they] argued that there should be a rerun within 90days”, he said.

The speaker, who pleaded that the same principles of law should apply in all situations round the country, wondered why card reader was an issue in the election of Governor Nyesom Wike yet it was not the same case in similar election in Lagos State.

He said: “We have strong faith in the Nigerian state and its judicial system. We believe as legislators that conscience not placed on the canvass of justice is unconscionable. We believe that the same principles in law should be applied in all circumstance.

“If Ambode in Lagos state has noting with card reader, why should Wike’s in Rivers have? Justice is one element that keep the faith of the people of a nation. It is my plea that wherever we find ourselves as people of Nigeria the Nigerian state should give us justice”.

Hon Ibani said their lawyers have applied “for the records of proceedings of the Tribunal, pointing out that by the dictates of the law, from the day judgment is given in any petition, any aggrieved party can file their appeal and in 60days, judgment should be delivered.

While insisting that no member of the House of Assembly was sacked by the tribunal, the speaker pleaded that if a particular principle applied in some situations in the North and in the South-West, it should also apply in the South-South.

The speaker, who reiterated his position that the general elections in the state were free and fair, said he was hopeful that the judiciary will redress what he perceived as wrong done with nullification of the elections by the tribunal.

“You can’t insulate democracy from justice. Through free will the people voted Governor Wike and members of the state House of Assembly. We must keep faith with the Nigeria state”, he said.

The speaker, who sensed that the tribunal judgment so far had generated a form of tension in the state, said he had to address the press to douse the tension.

“People will always say this Speaker does not laugh. Today I am going to laugh. Leadership entails maturity”, he said on a lighter note.