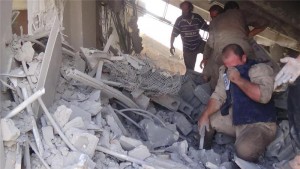 Four Russian warships in the Caspian Sea have launched 26 rockets at Islamic State of Iraq and the Levant (ISIL) in Syria which hit their targets, Russia’s President Vladimir Putin and Defence Minister Sergei Shoigu said in a joint television appearance. Aljazeera reports:

“In addition to the air force, four warships of the Caspian flotilla have been involved,” Shoigu said, adding that the warships had carried out 26 cruise missile strikes against 11 targets. “The intensity of the strikes is increasing.”

Putin also stressed the need for cooperation with a US-led coalition fighting ISIL, saying that without cooperation from the US, Turkey and Saudi Arabia the intervention was unlikely to work. Also on Wednesday the Syrian army and pro-regime forces launched a major ground operation in Hama province backed by air support from Russian warplanes, a military source told AFP news agency.