Screening Of Ministerial Nominees To Be Streamed Live – Senate 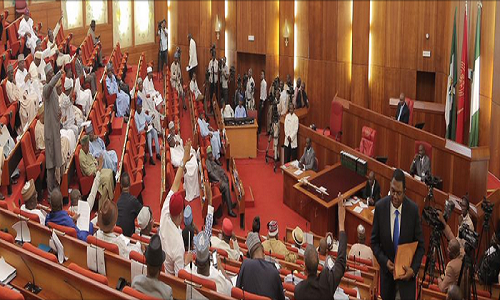 The screening of ministerial nominees which starts on Tuesday will be streamed live, a statement by Saraki’s Special Assistant on New Media, Bamikole Omishore, has said.

According to the statement, bloggers and news organizations that are interested in Live Blogging or Live Tweeting, or those interested in plugging into the livestreaming of the Ministerial screening are asked to contact the New Media Office of the Senate President for entry passes to the National Assembly, and the Senate gallery.

“All requests must be submitted by 5pm on Monday,” Omishore said.

“On Saturday, the 10th of October, 2015, the 8th Senate of the Federal Republic of Nigeria announced that the screening and confirmation process of the first batch of ministerial nominees by President Muhammadu Buhari to serve in his cabinet shall be streamed live on the National Assembly website.

“Additionally, on Friday, the Senate through its official Twitter account @NGRSenate, has also announced that the general public would be able to send in questions they would like to ask nominees by forwarding same to their Senators using the hashtag: #MinisterialScreening. All questions must be received before 5pm on Monday.

“The @NGRSenate Twitter handle will also be providing live tweets throughout the screening process.

“Nigerians would recall that the Senate President, Dr. Abubakar Bukola Saraki, took office amidst a pledge to reform the Senate and make its processes more transparent, inclusive and visible by employing e-Parliamentary technology in the Upper Chambers. Since then, the Senate President has tasked the Committee on Rules and Business to develop an e-Parliamentary system that can be employed at Senate Plenary sessions.

“This screening will create an avenue for Nigerians from all works of life to partake in governance, as the bridge between representatives and constituents will be bridged; with Senators asking questions sourced from Nigerians on Social Media.

“Additionally, the submitted resumes of candidates will be made available in the public space for Nigerians to examine,” the statement by Omishore said.