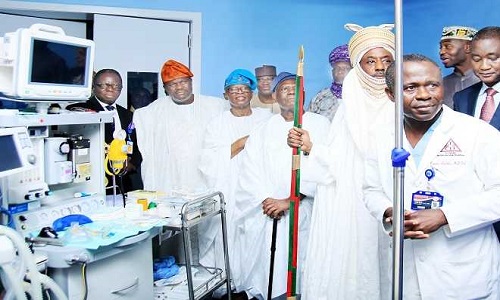 The Emir of Kano, Alhaji Muhammadu Sanusi II, has lamented Nigerians’ penchant for traveling abroad to seek medical care, saying the trend is bad for the country’s image.

He stated this yesterday during the commissioning of Tristate Heart and Vascular Centre at
Babcock University, Ilishan Remo, Ogun State.

According to the emir, “It is really shameful that‎ as endowed as Nigeria is, it can hardly do anything for itself.

Sanusi continued: “The question then is why do we keep importing what we have and exporting what we don’t have? A classical case was when Nigeria under military government organised a democratic election in Liberia. We didn’t have democracy at that time but we exported it”.

The monarch, however, expressed happiness with the establishment of Tristate Heart and Vascular Centre, which he noted will go a long way in providing succour to‎ people suffering heart-related diseases.

In his remarks, former governor of Osun State and former acting National Chairman of All Progressives Congress (APC), Chief Bisi Akande, said it is time for all Nigerians to join hands to “silent the silent killer”, which he said claims 17.3 million lives yearly.

Akande, who is also the Chairman Tristate Heart Foundation (THF) said: “The statistic is quite frightening, especially when you realise that one in every ‎two persons you meet today is prone to this deadly disease. The worst part is that, the victim may not even know that he or she has it. Research has shown that the strongest driver of heart failure is undiagnosed and untreated hypertension”.

The APC chieftain, therefore, called on all Nigerians to support the initiative introduced by both Tristate Heart Institute and Babcock University even as he urged Nigerians who have health issues relating to hearts, to stop embarking on medical tourism “when the ailment can now be handled successfully in Nigeria”.

In the same vein, Chairman Tristate Cardiovascular Associates, A. B Mahmoud, said though cardiovascular surgeries have been carried out in Ibadan, Lagos and Kano, the new cardiovascular centre in Babcock University, offers the best in term of services.