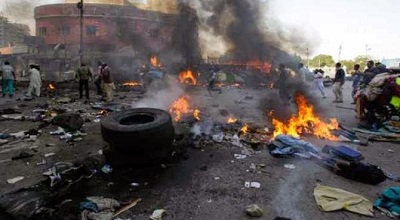 The blast was reported to have occurred around a few minutes past 5am when Muslim faithful were getting ready for the early Morning Prayer, Channels TV reports.

The explosion claimed the lives of the suicide bombers and four others while 17 others were injured and are currently receiving treatment at the Specialist Hospital.

This is coming barely 24 hours after many worshipers were feared dead in a bomb explosion in a mosque around Mulai area of Maiduguri.

According to the National Emergency Management Agency, NEMA, in the last 24 hours, five bombs have exploded in Maiduguri with a total of 49 persons injured and 39 dead.