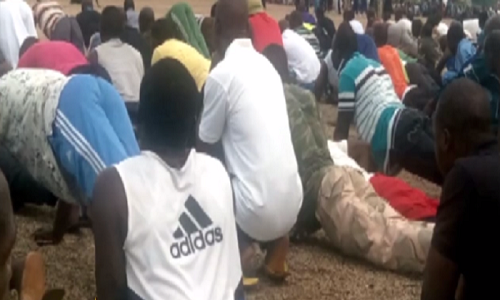 Al Jazeera has obtained footage of Nigerian soldiers being trained in civilian clothes and bathroom slippers at the Nigeria Army Training Centre, Kontagora, in Niger State.
The photos, taken by a man claiming to be a soldier of the Nigerian Army, has again brought to the fore issues of poor training of troops sent to the theatre of operations against Boko Haram in the Northeast.
Speaking under the condition of anonymity, the soldier, who was one of the over 3,000 soldiers recently reinstated back into the Nigeria Army on the orders of President Muhammadu Buhari, said the troops captured in the photos are part of the 3rd armored division.
“How could somebody be training with bathroom slippers? How could someone be training with ordinary clothes? None of us having rifle? None of us have uniform? Majority of the soldiers are hungry”, he said
The soldier also accused the military top brass of diverting the budget meant for soldiers into private accounts.
“I believe the government released the money but, it is unfortunate that some people have decided that is the only way of making their millions”, he said
The soldier’s claim was however dismissed by the Chief of Army Staff, Lt. Gen. Tukur Buratai, who said soldiers do not necessarily have to always train in their uniforms.
“You don’t have to always train in uniform. Their kits are being dispatched to their units for them to be re-kitted and to be re-armed”, he said.
The soldier also accused the military authorities of failing to re-integrate members of the dismissed soldiers’ families to the barracks.
In a one minute forty two seconds video showing where about 50 families of the reinstated soldiers are living, Al Jazeera reports that there is no light, potable water or hygienic toilet facilities there.
The reinstated soldier said he and his colleagues won’t be able to focus on the war against Boko Haram with their families living in abject conditions.
Watch video here: