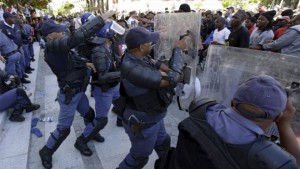 Twenty-nine South Africans have been charged with public violence in the biggest student protest to hit the country since apartheid ended in 1994. Police again fired stun grenades to disperse students in Cape Town, a day after protesters stormed the parliamentary complex.

Thousands have also descended on the governing party’s headquarters in the main city, Johannesburg. The students are angry with a proposed increase in tuition fees. The demonstrations began last week at Johannesburg’s prestigious University of the Witwatersrand, and have since spread across the country, forcing the closure of some of South Africa’s top universities.

On at least two occasions, police foiled attempts by the protesters to reach the headquarters of the governing African National Congress (ANC), pushing them back to their campuses. But the students regrouped and finally reached the building, named Luthuli House after South Africa’s first Nobel Peace laureate Albert Luthuli.

The students are singing and chanting anti-apartheid songs, invoking memories of the decades-long campaign which led to the overthrow of the apartheid regime in 1994. Traffic is gridlocked in the area. The ANC has pulled out its election truck and seem to be wiring a loud speaker. It is unclear clear at this stage who will be addressing the crowd.