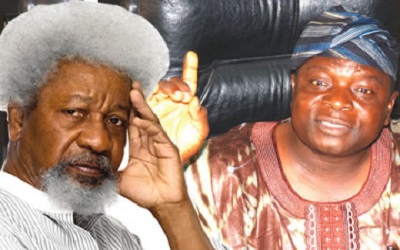 Nobel Laureate, Professor Wole Soyinka, on Saturday, stepped down from his position as Chairman of the Board of Trustees of the Centre for Black Culture and International Understanding, two days to a hearing at the Federal High Court, Osogbo, in a case between the centre and the Attorney General of Osun State.

The case has the Attorney General of Osun State as the first defendant, while the CBCIU and others are the plaintiffs.

The chairmanship of the board is in contention between former Governor Olagunsoye Oyinlola and Soyinka.

In a recent public face-off, Soyinka accused Oyinlola of carrying on illegally as the chairman of the board of the UNESCO-affiliated centre, but the ex-governor countered the claim by the Nobel Laureate by showing documents which authorized him to be the permanent chairman of the board.

Soyinka, in a statement titled, ‘Unfinished business in the CBCIU’, on Saturday, however, said, “The resumption of hearing on the Oyinlola versus Osun case of wrongful dismissal strikes me as a compelling juncture at which to express my frustration and embarrassment at the persistence of sectors of the media in designating the situation as some kind of hustle for position between two individuals. This is painful reductionism.

“In any case, I am left with no choice but to openly demand of the governor of Osun State the immediate and formal acceptance of my resignation letter from CBCIU chairmanship. In that resignation letter of July 14, 2015, my position was spelt out in part, as follows:

“I undertook this assignment on principle – quite apart from my sentimental attachment to the political constituency of my late friend, Bola Ige, assassinated by those very forces against which CBCIU must remain resolutely embattled”.

Soyinka added that he found it despicable when “an elected individual” would divert the resources of his electorate to “carving out for himself a sinecure”, warning that self-service should not be read in the vocabulary of anyone fortunate enough to be called to serve his or her people.

He also denied claims that he was involved in the legal battles surrounding the chairmanship of the centre.

According to him, “My layman understanding – backed, fortunately, by consultations — is that this is a legal tussle between Prince Oyinlola, former governor of Osun State, and his coterie on the one hand, and the incumbent government of Ogbeni Rauf Aregbesola and his House of lawgivers on the other.

“Let me repeat this: I have not instituted any case against either governor, nor have I been issued with any summons to appear either as plaintiff or respondent. The CBCIU is, of course, the object of contention, but the CBCIU is not listed among my personal possessions or creations.

“To play a variation on the late MKO Abiola’s favourite sayings: while I do occasionally loan out my head to crack a coconut, I deplore any attempt to have it shaved it in my absence. I am not a party to this case!”

The Nobel Laureate expressed conviction that his exclusion by “the state lawyers” from court hearings in the legal battle should be sufficient to affirm his irrelevance in the encounter.

“I am totally in the dark, except through the concern of colleagues who have forwarded media reports on the notice of resumption. I am out of the country at present and, for all I know, may be cited for contempt for failure to put in appearance, etc.

“I must not end this brief position statement without commending Prince Oyinlola yet again for pursuing his quest for justice the civil way – submitting himself to the authority of the law courts. This is what has been constantly urged on him – wait! Do not pre-empt the court and do not concoct, distort or embellish its pronouncements!

“The present constitutes an advance in civilised conduct, an improvement on mounting night commando raids on the CBCIU headquarters in Oshogbo to empty it of all its contents. Equally praiseworthy is Prince Oyinlola’s formal notice to would-be participants of the ‘postponement’ of the much touted conference on globalisation, originally destined for Brazil this November”, he said.