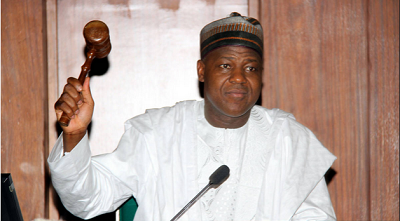 Speaker of the House of Representatives, Yakubu Dogara, has received sweeping powers to deal with individuals or groups perceived as threats to his seat by the new rules adopted by the House.

The move to legally empower Dogara to deal with perceived threats and opponents, came on the heels of the opposition that trailed his emergence as Speaker.

It was learnt that while the Speaker continues to consolidate his grip on the House, the need to ensure any action he takes in the course of protecting his seat and the sanctity of the green chambers is backed by the rules governing the House, arose.

Towards this end, the Rep Aminu Shagari-led 15-member ad-hoc committee on Rules and Business, reviewed the standing orders of the House.

The new rules were adopted on October 8.

The committee recommended that henceforth, any member that “approaches the mace with whatever intent” during an uproar, shall be meted with a suspension of a period not less than six months.

The new rules also provide that: “The mace is the sacred authority of the House and the only authorized staff of the Sergeant-at-Arms may approach, handle or remove it in the ordinary course of their official duties.

“No member of the House or his agent may approach, handle or remove the mace under any circumstance. Any member who approaches or handles the mace with whatever intent, including to remove, or who removes the mace shall be liable to suspension from the service of the House for a period not less than six months or such longer period as the Speaker or Chairman may consider expedient having regard to the particular circumstances”, it said.

In addition, the new rules provide that the Speaker can suspend outright, for 30 plenary days, any member that refuses to obey his directive to leave the House chamber during a particular day’s sitting, after such a member has been directed to assume their seat but failed to do so.

It says a member who is asked to leave the House chamber by the Speaker but fails, “…when summoned under the Speaker’s Order by the Sergeant-at-Arms, the Speaker shall call to the attention of the House that force is necessary in order to compel obedience and any member named by the Speaker as having refused to obey his direction shall thereupon, without any further question being put, be suspended from the service of the House for a period not exceeding 30 plenary days”.

In the same vein, the new rules empower the Speaker to suspend House sitting anytime he foresees an apparent disorder.

“In the case of a grave disorder arising in the House, the Speaker may, if he deems it necessary to do so, suspend the sitting for a time to be named by him”, it states.

The report also bans members from entering the chamber or anywhere in the House with weapons, saying “No member shall enter the chamber or the precincts of the House of Representatives with guns, daggers, grenades, knives or any other weapons or instrument of violence”.

Recall that since the return to democratic system of governance in 1999, there had been attempts to steal the mace from the House during major disagreements but this is the first time that lawmakers would come up with a rule sanctioning such an action.

Attempts to get reaction of the chairman of the House ad-hoc committee on media, Rep Sani Zorro, were not successful yesterday.