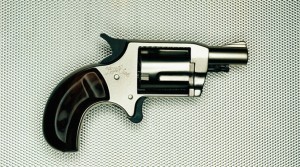 2015 isn’t over yet, but the Washington Post reports that so far someone has been shot by a toddler every single week. Reporter Christopher Ingraham says he spent hours sifting through news reports, and the numbers are quite shocking.

This year alone, Ingraham found 43 instances of someone being shot by someone 3 years old or younger. In at least 31 of those cases, a toddler discovered a gun and actually shot themselves, the report continued.

Ingraham said boys have been more likely to do this, and he could only find three cases where a girl under the age of four actually wounded someone with a weapon.

So far this year, 24 states have been impacted by a toddler using a gun. Missouri takes the lead, unfortunately, with the most shootings – 5 to date. Florida is running close behind with four, and Texas has three. The report says these numbers do not include instances where toddlers were shot by older children or adults.

What can be done to prevent these tragedies? “In a study of accidental shootings by children of all ages, they estimate that ‘more than two-thirds of these tragedies could be avoided if gun owners stored their guns responsibly and prevented children from accessing them,” the Post report said.