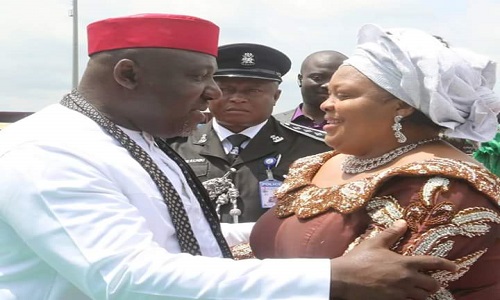 The Imo State Government has reacted to reports in the social media that Governor Rochas Okorocha beat his wife, Nneoma Nkechi, to a pulp because she asked him to pay civil servants their salary arrears.

Describing the report as unfounded and bare-faced lies, the Imo State Government lamented the activities of those it called “heartless elements, who have invaded the social media for the sake of inflicting cuts on their victims including those they even know, God has blessed”.

A statement on Sunday signed by Chief Press Secretary to the Governor, Sam Onwuemeodo, further described the report of Okorocha beating his wife because she spoke on behalf of civil servants allegedly owed salaries in the state as a mere fabrication by those expectedly in dire need of salvation.

“No true Christian or Muslim can tell such bare lies against any one”, the statement said.

Onwuemeodo explained that in the first place, salaries payment in the state has been up to date and challenged anyone to prove otherwise.

“Again, Governor Okorocha has also paid teachers up to the month of September too. We also stand to be proved wrong on this innocent Claim.

“The Imo governor has equally paid up to the month of September, the Salaries of workers in some government’s parastatals and agencies except some of those the government has concessioned their Managements, including some of the Health outfits in the State and in the overall interest of Imo people”, Okorocha’s spokesperson added.

He explained that the Salary of the workers in the affected parastatals had been made available long before now, but there was a grey area as government and leaders of the organized labour in the state were not able to agree at their last meeting what should be the fate of the affected workers in the concerned parastatals after off-loading their outstanding salaries.

“The government had, during the meeting with the labour leaders given two options to the workers in the affected Parastatals that had their Managements Concessioned for efficiency and productivity. That, either they would be paid their remaining salaries and transferred out to other government’s establishments in the State or be paid off with all their entitlements.

“The labour leaders could not give final answer till the end of the meeting. Another meeting was about to be fixed when the concerned workers were reported in the media to have rejected all the options and insisted on remaining put in the parastatals. No government can allow such affront”.

Putting a lie to the online report, the statement pointed out that its fabricators could not say where the incident they had claimed took place because Mrs. Nneoma Nkechi Okorocha had been away in the U.S for three months now where she had gone to take care of her daughter who gave birth to a bouncing baby boy.

“She had gone for what the Igbos call ‘Omugwo’, the chief press secretary stated. “She has been there alone without the husband. The husband (governor) has been in Imo since that period. So, where did the governor and the wife meet to begin to argue over the salary of Civil Servants to the extent of the governor beating the wife? The referenced incident must have only taken place in the imaginations of the authors”.

“You can see the unclad lies. And at times one is forced to begin to wonder why some people trade on falsehood, and what could be their stake. This is unfortunate.

“We want to state with every sense of sincerity that the report was totally false and should be seen and treated as such. While, we ask God to meet all these people taking delight in propagating or marketing falsehood against innocent people, like he met the biblical Saul and indeed, change them to Paul of our generation”, the statement concluded.