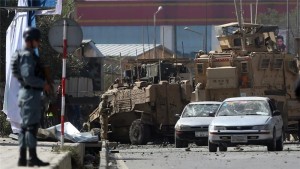 A suicide car bomber has attacked a convoy of NATO troops in Afghanistan’s capital Kabul, the country’s interior ministry said. Sunday’s explosion caused civilian casualties, the ministry said without elaborating. NATO said three civilians were wounded in the blast, adding that there were no casualties among its troops. Aljazeera reports:

The blast occurred at a busy time of the day at a central part of the city, Al Jazeera’s Jennifer Glasse reported from Kabul.  “Taliban spokesman Zabiullah Mujahid confirmed the Taliban were responsible for the attack in a text message that claimed all in the vehicles were killed,” our correspondent said, adding that the Taliban often inflate casualty figures.

It is the Taliban’s second attack in Kabul this week.  The Taliban have stepped up attacks around Afghanistan since they launched their annual summer offensive in late April. The group overran the strategic northern city of Kunduz in late September in their most spectacular victory in 14 years.

The capture of the provincial capital for three days marked a stinging blow for Western-trained Afghan forces, who have largely been fighting on their own since the end of NATO’s combat mission in December.