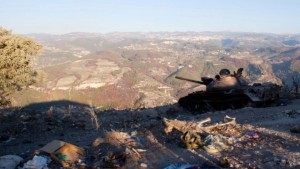 At least 45 people have been killed by Russian air strikes on a rebel-held area of north-western Syria, a monitoring group says. The Syrian Observatory for Human Rights reported that Russian warplanes bombed the rugged Jabal al-Akrad region of Latakia province on Monday afternoon.

The commander of a Western-backed Free Syrian Army brigade and the families of rebels were among the dead, it added. Russia said it had targeted Islamic State militants in Latakia on Monday.

However, activists say the jihadist group has little or no presence in the coastal province, which is a stronghold of President Bashar al-Assad’s Alawite sect. Moderate and Islamist rebel groups took control of Jabal al-Akrad in 2012.

From positions in the mountainous region, they have been able to shell the city of Latakia’s airport and Qardaha, the president’s ancestral village.