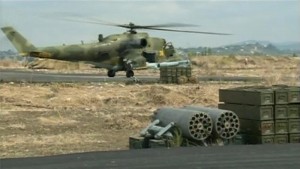 Syrian troops backed by Russian air strikes have advanced against fighters in the centre of the country as Russian President Vladimir Putin defended Moscow’s intervention in the conflict, saying it would aid efforts to reach a political settlement. Aljazeera has more:

Putin said his country’s objective was to stabilise the Syrian government and create conditions for a political compromise. He also called on other countries to “unite efforts against this evil”. “When a division of international terrorists stands near the capital, then there is probably little desire for the Syrian government to negotiate, most likely feeling itself under siege in its own capital,” he said in an interview with Russian state television broadcast on Sunday.

Critics of Russia’s intervention have argued that strengthening the government will make reaching a compromise more difficult, and on Sunday the main Western-backed opposition group said the strikes would undermine efforts to reach a settlement.

The Syrian National Coalition also said it would boycott talks suggested by the UN envoy for Syria, Staffan de Mistura, saying any political process must be based on “ending the Russian aggression” and reviving a plan adopted in 2012.