An early morning tanker fire has claimed the life of one and burnt three trucks at the Oshodi area of Lagos, Southwest Nigeria. 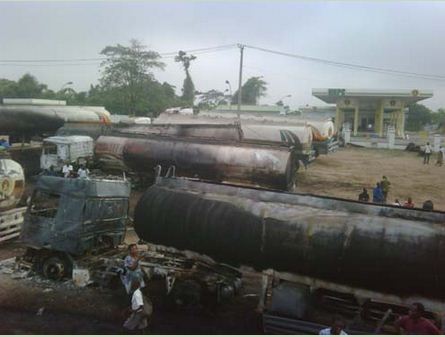 PM NEWS gathered that the incident occurred around 1:45am on Tuesday by NAFDAC office, Oshodi.

A fuel tanker loaded with 33,000 litres of Premium Motor Spirit, PMS, fell at a bend behind NAFDAC in Oshodi, spilling its content on the road, while an oncoming trailer, sensing danger stopped but a smaller truck thinking that the trailer was stationery tried to navigate by the trailer and with a spark from the vehicle’s silencer, fire broke out.

He said that a man trying to scoop fuel from the spillage was burnt to death, while the drivers of the three vehicles escaped unhurt.

Akindele said the three trucks were burnt by the fire but that the efforts of LASEMA officials, fire service men prevented the fire from spreading and causing more damage.

He said his men, LASTMA officials and others were still on ground trying to remove the burnt vehicles from the highway.

Akindele warned Lagosians to be careful of scooping fuel whenever a tanker spilled its content as they would never know when it would result to fire, lamenting that the life loss could have been prevented if the man had not attempted to scoop fuel from the spillage. See photos below……