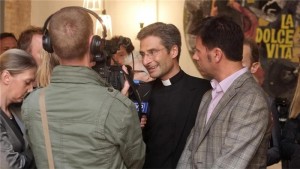 The Vatican has fired a senior priest, who publicly came out as gay, on the eve of a major meeting of church leaders to discuss the Church’s stance on social issues such as divorce and homosexuality.

In a statement on Saturday, a spokesman for Pope Francis said Polish priest Krzystof Charamsa’s action had been “very serious and irresponsible”, and that he would be automatically kicked out of his post as a theologian in the Vatican. Charamsa, a theologian, is a mid-level official in the Vatican bureaucracy’s dealing with church doctrine.

Flanked by his Spanish boyfriend and sporting his priest’s collar, Charamsa told a news conference in Rome he had been compelled to speak out against the hypocrisy and paranoia that he says shapes the Church’s attitude to sexual minorities. While appearing resigned to the fact that his life as a priest is over, he said: “I’m out of the closet and I’m very happy about that.” Visibly moved at times but always smiling, the 43-year-old added in Italian: “I want to be an advocate for all sexual minorities and their families who have suffered in silence.”

In an indication that Charamsa had planned the move for some time, he presented a 10-point “liberation manifesto” against “institutionalised homophobia in the Church”, which he said particularly oppressed the gay men who, according to him, make up the majority of priests. He also revealed plans for a book about his 12 years at the heart of a Vatican bureaucracy only just recovering from a scandal under previous pope Benedict XVI over the influence of a “gay lobby” among senior clergy.