The Department of State Security Service (DSS) paraded the two suspected kidnappers of Olu Falae in front of the press today. The two kidnappers, Abdullahi Usman and Babawuro Kato, confessed to their crime saying they did it to have money to celebrate Salah. 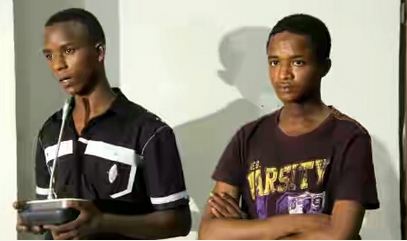 The suspects made their statements while answering questions from journalists at a press conference in the DSS Headquarters.

According to Abdullahi Usman, he initiated the plan for money to celebrate Salah, but regretted that one of his other accomplices made away with the N5 million random paid by the family Falae’s release. Babawuro Kato, who drove the victim on motorcycle from one location to another, also corroborated these statements but said that he did not know the identity of the captive and he was not part of the abduction. Speaking on behalf of the DSS, Abdullahi Garba said that their investigation has revealed that the abductors were merely criminals, and that the kidnapping was not because of Falae’s political status or his prominence in the Yoruba community as speculated by some. Mr. Garba maintained that the abductors collected a N5 million ransom and were arrested at Zebra Hotel along Ganaja Road, Lokoja in Kogi State.

He assured Nigerians that efforts are being intensified to ensure that all those associated with this criminal act will be brought to justice.